A day of sailing that goes sideways, trumps a day of Covid dwelling – everytime! 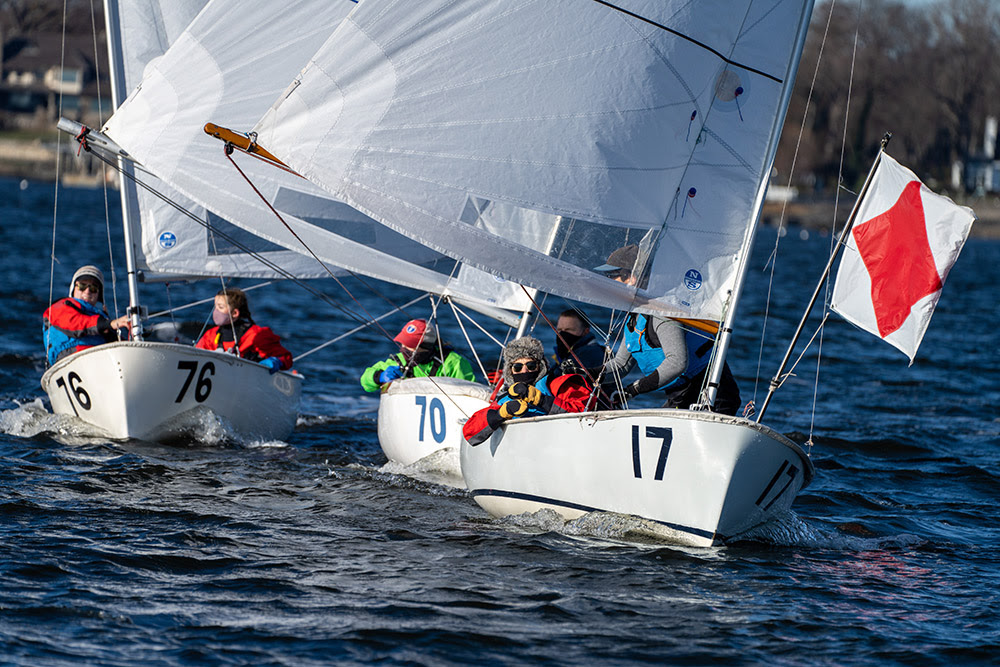 02 Mar A day of sailing that goes sideways, trumps a day of Covid dwelling – everytime!

Sometimes the debrief that comes out of a rough day can be more helpful or insightful, particularly for the one who endures it.
Andre and I had a tough day (I of course recognize placing 5th is all relative**) and I am still dissecting that but regardless of the result I  remind myself there were “a few” moments, I took a breath, looked out at the horizon and reminded myself, “this is so much better than being-home … with Andre pasted to YouTube or mindlessly attached to the PS4.”    This is an attempt to put it all in perspective, learn and be better, and if nothing else, moving ahead with father and son in an IC.              **fn below>

Make no mistake, Sunday was a beautiful day, some classic LYC winter NW variable conditions.  The kind Ned Roseberry would thrive and then claim “the timing of the lights on the way to the club” were what led to a 95% day in variable mayhem. I digress…

… we finished 4th.  Not a bad start, But.  We started mid left.  Seemed safe and (at least best I recall) we were in position for a pretty conservative top five rounding.  Nope.  I must have put my head down (eyes not uphill) and we were crushed by a right hand shift I never saw.  We rounded in the top 10 and made some smart moves, passed a few boats until we rounded the 2nd offset,and THEN, … we came upon #76 Nicholas/Molly and #808 Betsy & Jeremy Parker, virtually stopped, pointed in curiously unusual direction(s).  What didn’t occur to me was that those two boats were hair-balled together attached 21′ off the water by 808’s halyard.  Knowing that I would have chosen the much better option to sail a couple boat lengths out of our way rather than between them!I feel bad for Jeremy and Betsy as I know they were battling for a 1 or a 2 before #76 entered their race then being further “Patinized” by #17.    Afterwards they asked me about redress.  Unfortunately I am afraid there was no ground such and I didn’t think I could make that argument on the water.  That situation, which I am afraid no one would ever anticipate served as an interesting lingering mental distraction.  In hindsight, I think intentionally processing that as, “avoidable yet unusual,” may have been helpful to de-escalate emotional integrity.  I sense we never  completely moved past that, concentration wise.

we had equal “head in the boat” type casualties.  Finished- 7th.  I started to escalate a sense of urgency in my tone of voice.  This has an inverse participatory affect on Andre who can be rather soft spoken in the boat to begin with.  Of course, my reaction is to ask questions and try to get him to move and rise to the occasion.  There is a part of that I am sure starts to make him, possibly any crew, feel as though I am “blaming them” for being behind, out of phase or more frantic.  Andre and I talked about this a couple times this week and hopefully worked out a few preemptive expectations, behaviors and communication that will keep us in it (longer;).

we were 6th and I don’t recall anything other than getting beaten up by boats on the edges.  I can tell you for sure we (specifically speaking for myself) started to “fatigue from concentration on what’s important in the moment,”  giving way to rumination.

I can attest followed a between race, “morale inventory.”  A couple breaths in acceptance and acknowledgment there was no PS4 in the boat. (which included a visual of the sun starting to wane/reflect on the windows of the house on the point).  We finished 3rd and tha’d be our high water mark of the day!

… started well.  Least as memory recalls we were in phase with #75 Andy and Lizzy.  It went south when I saw a lefty puff that we took a hitch away and ended up tacking too close in front of #171, Keith and Sydney and by the time I shamed myself (and irked Andre) we were about to implode.  I’m sure my tone was curt because it drew, “foot stomping and self depreciation.”  Frustration was had by all inside boat #17.  We discussed the fun factor depletion in “degrees Celsius,” and concluded we had had enough and mentioned, “we were headed in,” to the pin boat.  A less than satisfying sail in awarded us the first “break of the day.”  The wind had had enough and we didn’t get a “0” for the 6th race.  Andre and I have had a few good conversations and quite frankly we’ll probably be more resilient in the future for all this.  We may have had more laughs on saturday sledding, (below) but I know one thing for sure.  On Sunday we made it as far as we did with a heck of a lot more intelligent cooperation than past years, getting out to the course and keeping hands and feet warm … which wasn’t the case on Saturday at Forest Park!

Live, Learn, and “keep showing up,” as Neil Fowler would say.

Fn** – Performance is all relative and I certainly appreciate 5th is no tragedy, yet coupled with giving away 10-15 points (overall on the season) to #74, Ted and Meridith each time they go skiing, might put it in perspective😉”No IPhone, or PS4, PRICELESS!”
Til the next, #17, PJ and Andre