Lessons Learned – “from the short end of the stick”

Some times you have to put your feet up, sit back and simply observe excellence – Alonso Collates’ performance in Colombia, winner of 7 of 15 Sunfish World Championship races will stand in reverence as one of the great SFW performances.  Truly a peak performance in all senses of the phrase.

On the short end of the stick of performance it can be a challenge to keep it all in perspective particularly if one finds themselves ill prepared.  Everyone unfortunately or “fortunately” finds themselves in a space that was not, “as planned, foreseen or practiced,” at some point.   I can attest from an expectation of a grand stand finding oneself in that space is a “warped perspective” (admittedly I was right there – seen above;-) particularly coming off such a year of success.  In reflection, here are a few final thoughts and lessons learned.
1) Sometimes variables fall outside the norm.  If you haven’t ever seen them before that’s what I consider, “trouble brewing.”  And I can’t put it any better than this 1980’s master piece  of Gary Larson’s “Far Side.” 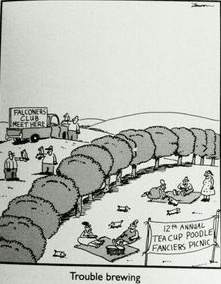 2) Recognizing obstacles is the only way to overcome them.  To do so masterfully, you’ve had to have “seen yourself” already there (or be extremely lucky).  There’s a saying, about “rather being lucky, than good.”   I would keep that one out there with “the Far Side” when planning your performance.
There were a few things I could attest to unplanned and unexpected upon leaving Colombia, but I’m definitely armed with a few more tools with that experience behind me.

That said, and of all the unusual conditions aside and lessons learned I am left with a few tokens for visual edification e.g. how often do you come across a picture taken (by a cameraman in the water) of Eduardo behind you?  That’s one for the scrap book or tool chest for another go around.
In the next and perhaps last of the series of these Worlds reflections I plan to talk a bit more on obstacles, performance techniques for circumvention and a word (or two) on the “Millennial movement” and why it is so important here and perhaps other areas we desire elite performance.