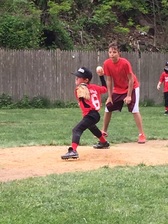 The movement of a pitchers motion has many moving parts. The skill revered or most noted is often arm strength and speed. Perhaps less flashy to consider is the body motion (e.g. hip position) from start to landing which accounts for about 50% of the energy or momentum involved in the pitch.

Momentum is defined as Mass (the body and /or arm) x Velocity (the motion directed toward the strike zone). The arm motion plus the body motion amounts to the total momentum or energy which generates the speed (velocity) of the pitch.

This is a huge oversimplification of perhaps one of the most complicated human feats but the physics tell the tale. E.g. a 64 lbs. kid with an 8 lb. arm must generate arm speed with 8x more velocity given the proportional difference in mass.  This means then that the energy driven by the body is 8x more effective and when used effectively reduces the less wear and tear on the fragile (often developing) tendons in the arm.

Practice of proper mechanics using the body to throw should be emphasized “and revered” to respect the physics and in turn the pitchers arm will be significantly less taxed.  Perhaps a little more respect and understanding of science could lead to fewer youth injuries. (see SI article July 2015, youth pitchers). As far as the science, message me if you’re interested in further discussion. I have a few ™ articles I would be happy to share.